Breweries, Tours and More! Oh My!

Nothing says Minnesota homebrewed beer like Surly…. The brewery may be known for its destination brewery in Minneapolis, but it hasn’t forgotten where it got its start in Brooklyn Center. The Minneapolis Northwest location just re-opened for public tours in 2018 and let us in for a glimpse of its homebrewed greatness!

Surly Brewing Company is an iconic Minnesota brewery known for its world-renowned beer and spunky philosophy, as well as being one of the fastest-growing breweries in the country. The Brooklyn Center brewery, which packages around 3,300 cans per hour, just re-opened for monthly tours in 2018, making it a must-see on any beer lover’s Minneapolis Northwest itinerary!

It all started in Brooklyn Center on December 30, 2005, when Todd Haug and Omar Ansari brewed their first batch of beer at the former Sparky Abrasives Factory that Ansari’s parents owned, which became Surly’s first location. It was the first brewery built west of the Mississippi in Minnesota in 20 years, and Omar was selling them Furious, a hoppy IPA. 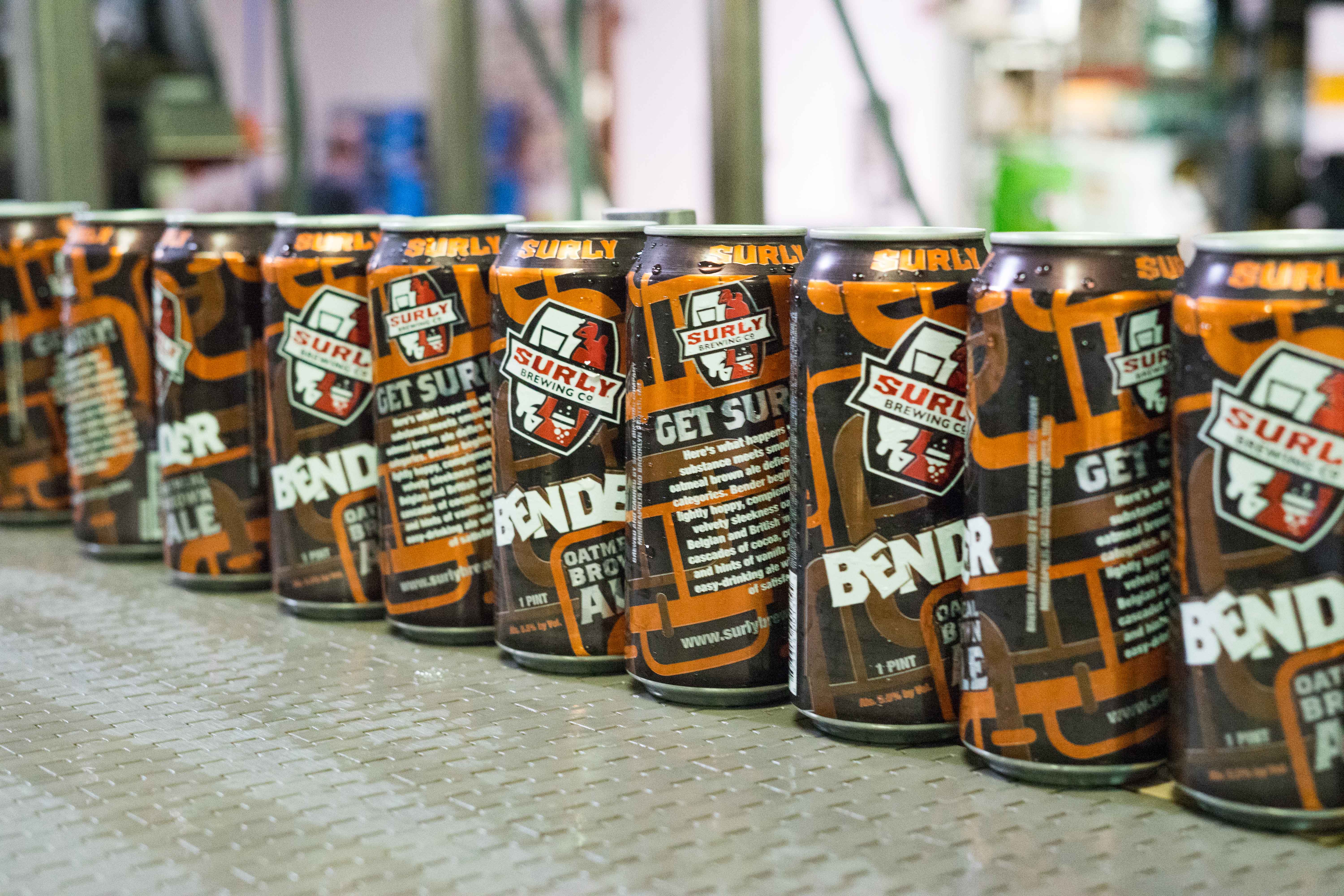 In February 2006, Surly started seling its first kegs of beer. It wasn’t long until they were filling growlers for longer and longer lines and getting Surly beer into more and more bars, liquor stores, and restaurants.

By 2011, Surly Brewing was nearing the limits of production in the Brooklyn Center brewery, and still not able to meet consumer demands. They needed to build a new brewery to increase production, but they had a very specific idea for the brewery they wanted to build… A brewery where people can see the beer being made, and then drink it in the brewery’s taproom and restaurant.  Surly worked with Minnesota legislators to make their dream destination brewery a reality. In 2014, the new brewery opened its doors and has remained a hotspot ever since! 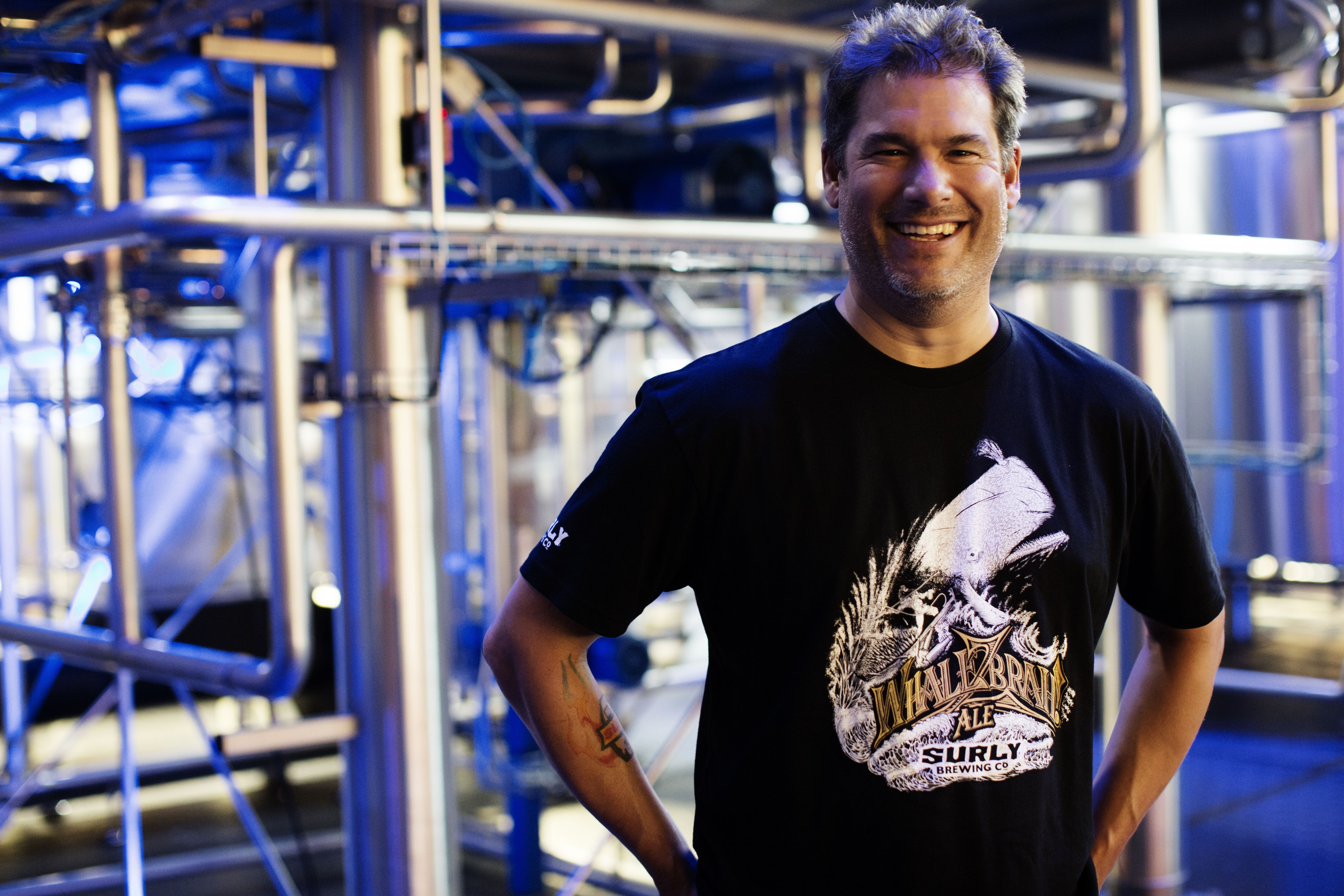 What does it really mean to be a “destination brewery?” Ansari summed it up in one simple sentence: “It means if you’re a craft beer lover flying into Minneapolis from, say Nashville, and you have one stop to make: it’s Surly.”

So, why re-open the Brooklyn Center for tours after the destination brewery opened in Minneapolis? The answer is simple, according to Ansari.

“No history of Surly is complete without showing people where it all began and a lot of our longtime fans have great memories of the old taproom, so it’s nice to be able to reconnect them to the place where they fell in love with Surly.”

The Brooklyn Center location produces a variety of Surly beers, including Todd the Axe Man, Bender, Coffee Bender, Overrated, Cynic and many more of Surly’s more than a dozen regular beers, plus some of their infusions and limited releases.

If this taste of Surly’s history leaves you wanting more, check out one of their “Old School Tours” at the Brooklyn Center Brewery on the third Friday of every month. To get the latest info on the tour follow Surly on Facebook, Twitter and Instagram, where they’ll drop notifications when sign up links are live on the tour page (Notifications are usually made Friday afternoons two weeks prior to tour.)

Tour Tip: The first Brooklyn Center tour in January 2018 sold out in under an hour, so make sure you sign up quickly after the links go live! 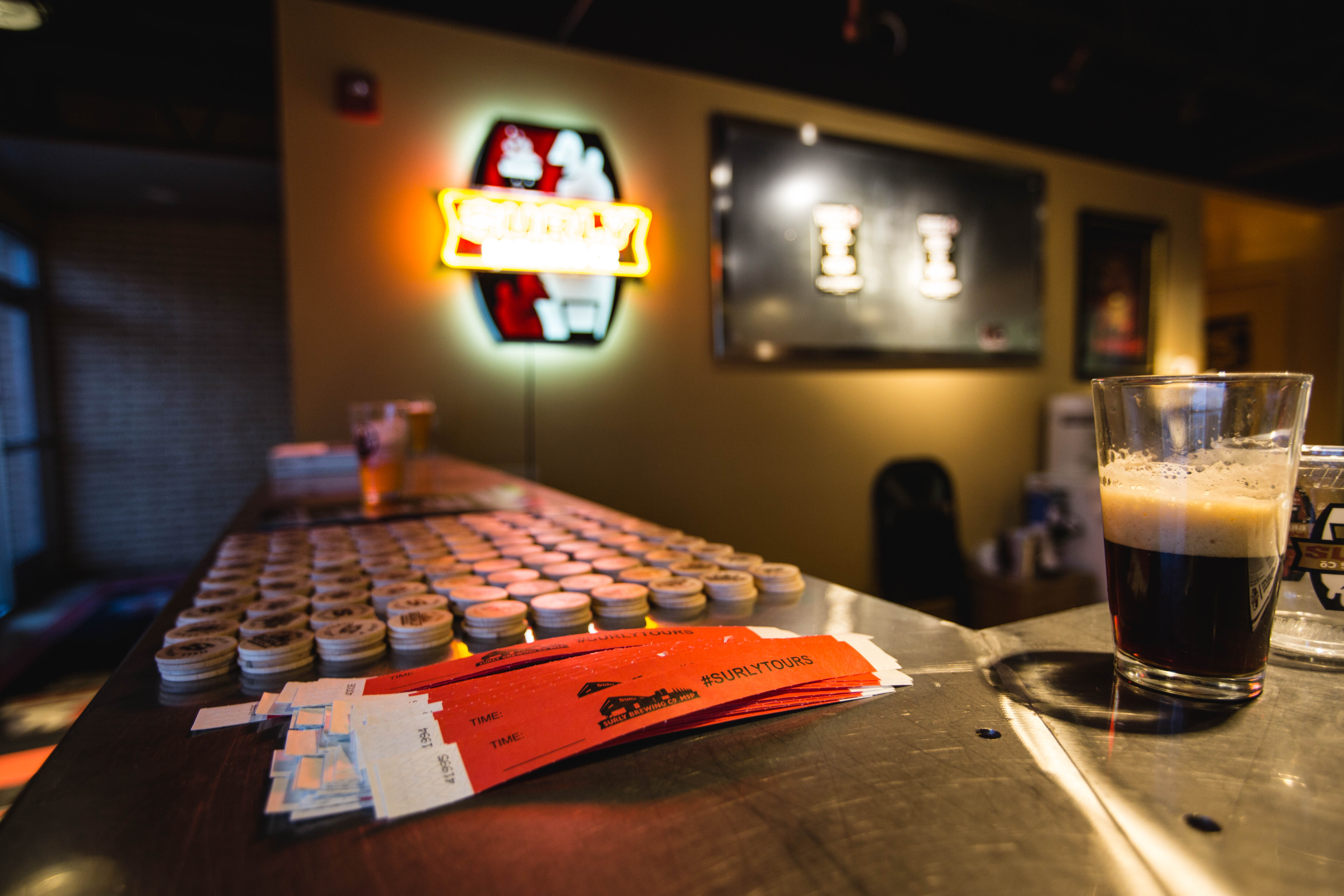 And don’t forget to come back in October for Darkness Day! It’s Surly’s annual celebration of the release of their Russian Imperial Stout, complete with dark metal bands for entertainment! 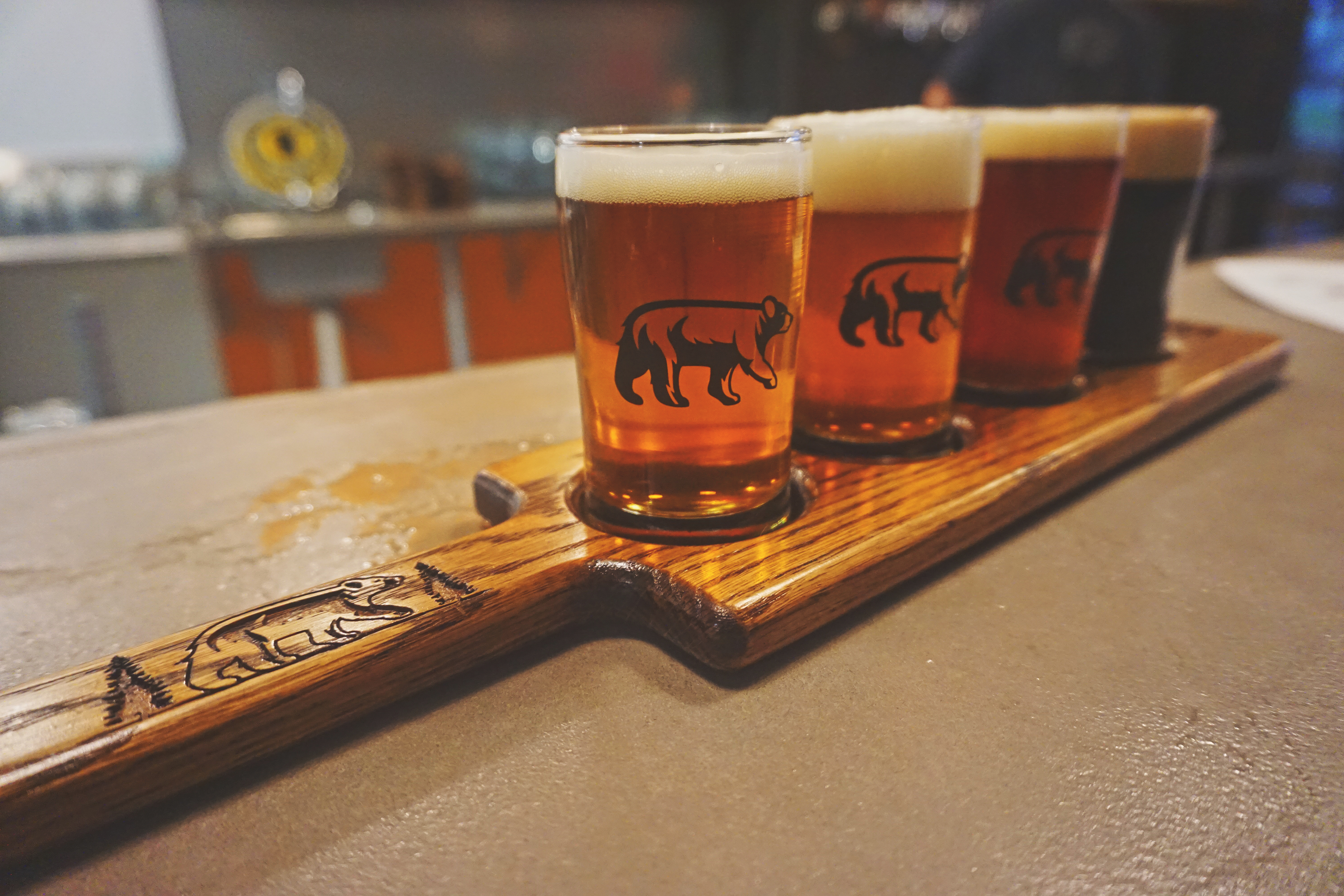 Group tours are available and they also offer an event space called the Barrel Room. Signup for a tour here: https://www.omnibrewing.com/taproom. 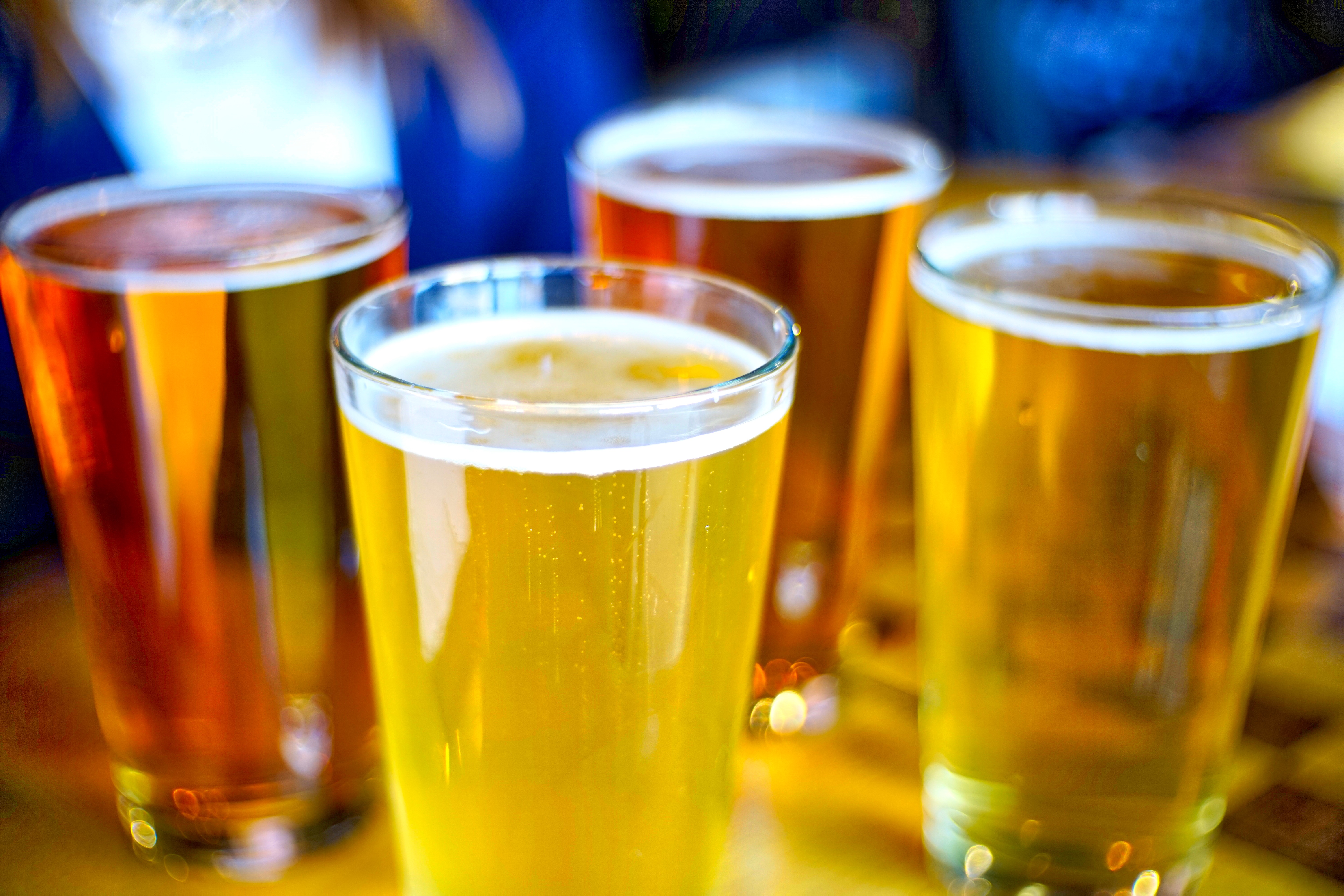 Tours are available by contacting events@wickedwortbrewingco.com at least two days in advance. And if you bring in a canned food donation to benefit PRISM Food Shelf in Golden Valley, you will receive a free 6-ounce brew of your choice to take along on your tour. Limit 30 guests per tour. Tours are for visitors 21 years of age and over only. 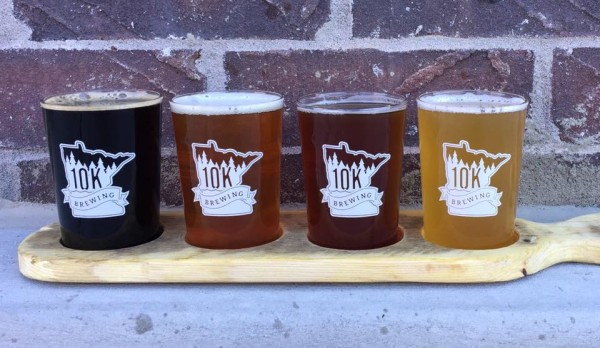 Check out the brewery’s event calendar for a full list of upcoming events.

For a drink with an Irish twist… 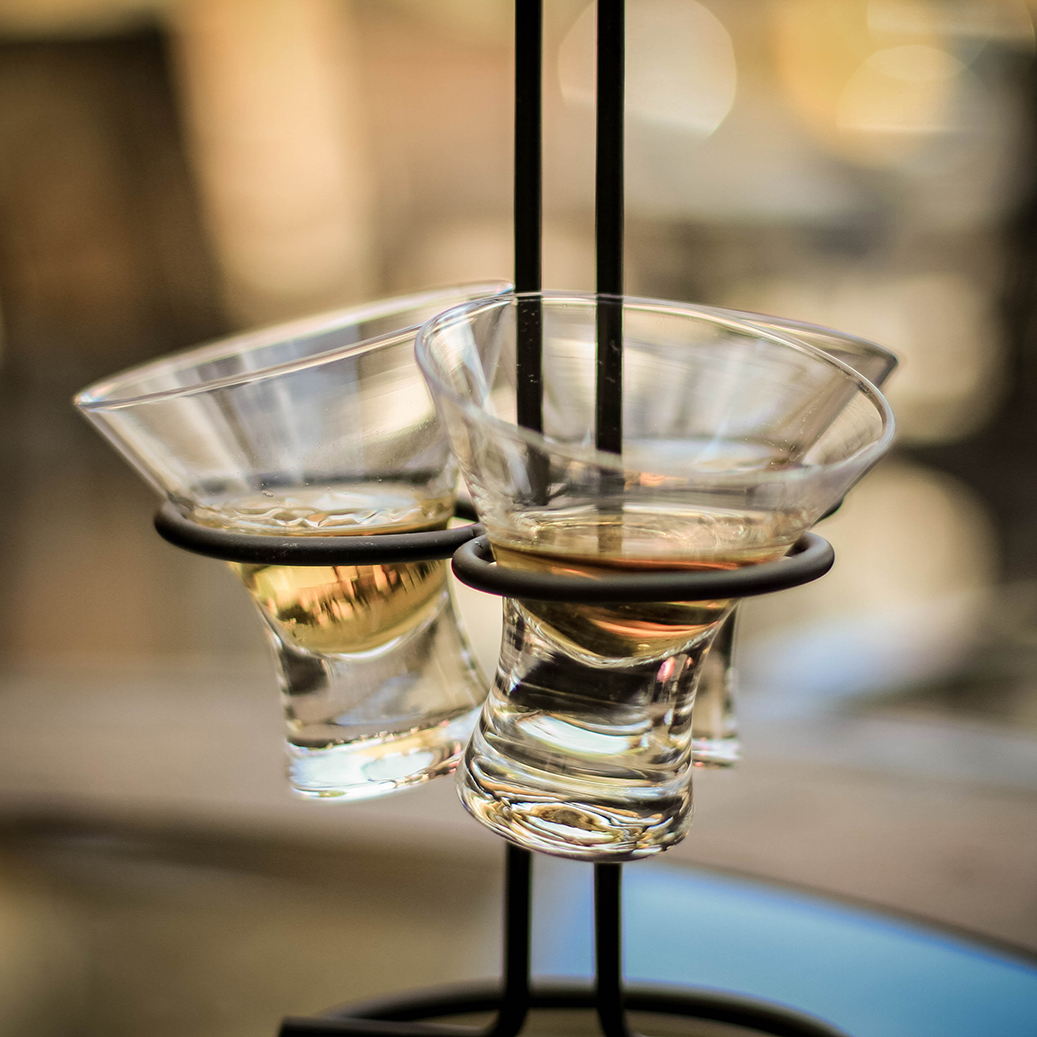 There’s a new brewery coming to town and it’s the first one ever in Brooklyn Park! Check out this recent article and video from CCX Media on our news page about the brewery opening!

You know what else goes great with a pint of beer? Pizza! Check out our guide to the best breweries and pizza places in Minneapolis Northwest! 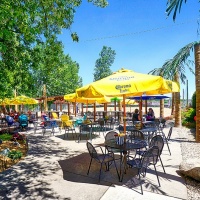 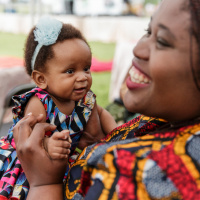 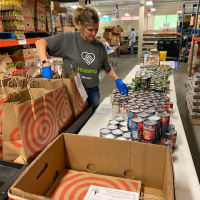 Surly Brewing Company is an iconic Minnesota brewery known for its world-renowned beer and spunky philosophy, as well as being one…

Wicked Wort in Robbinsdale opened in 2014 and has become a destination tap room in the Twin Cities, with a small bar with 10 tap…

10K Brewing is an Anoka brewery founded on Minnesota values: "Nice Beer. Nice People." The brewery leverages as much local…

Escape to Ireland – Right in Maple Grove If a trip to Ireland is on your bucket list, there is a charming, unique spot in Maple…