The big news of the season is Nicollet Mall. After what felt like a half-century of construction, downtown Minneapolis’ de facto Main Street is back in business.

Say what you will about the redesign, one of its most successful elements is its ability to make room for sidewalk cafes. 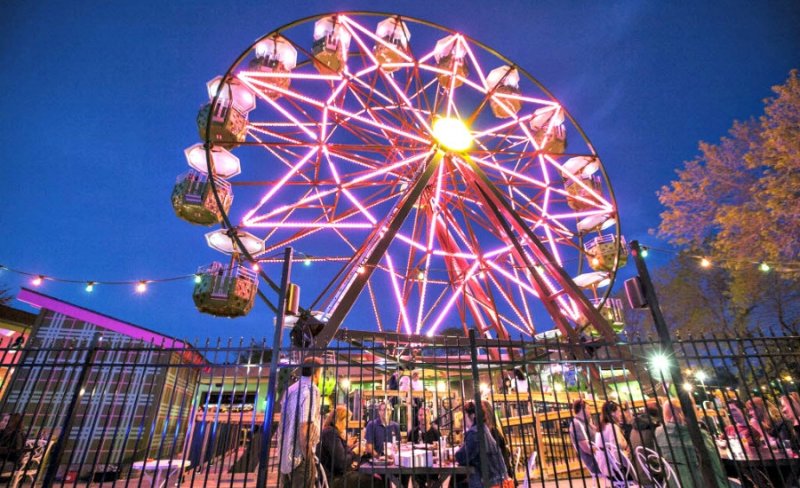 Although the patio at Esker Grove(723 Vineland Place, Mpls., 612-375-7542, eskergrove.com) is only in its second summer, the Walker Art Center has a long and distinguished outdoor dining history, going back to its Gallery 8 days. Today, the museum’s outdoor dining venue is the place to impress out-of-towners, with its views of the Minneapolis Sculpture Garden and downtown skyline, and chefs Doug Flicker’s and Dennis Leaf-Smith’s sophisticated but approachable cooking.

On the subject of views, the Campus Club at the University of Minnesota’s Coffman Union (300 Washington Av. SE., Mpls., 612-626-7788, campusclubumn.org) uses the summer months to open up its terrace to the general public during weekday happy hour (4 to 7 p.m., through Aug. 31), offering affordable libations and small plates. The extraordinary vistas are free.

The winner of the Most Urbane Sidewalk Cafe award surely belongs to Meritage (410 St. Peter St., St. Paul, 651-222-5670, meritage-stpaul.com), given the architectural riches (Landmark Center, the St. Paul Hotel, the Hamm Building) in every direction. A close runner-up are the tables that Brenda Langton sets out in front of her Spoonriver (750 S. 2nd St., Mpls., 612-436-2236, spoonriver.com), which really come alive during brunch on Saturday mornings when the adjacent Mill City Farmers Market is in full swing.

When restaurateurs also own nurseries, beautiful patios are a natural outcome. That’s certainly the case at the locavore-minded Wise Acre Eatery (5401 Nicollet Av. S., Mpls., 612-354-2577, wiseacreeatery.com), which is the inspiring work of Tangletown Gardens co-owners Scott Endres and Dean Engelmann.

The dramatic solar panels that hover over (and shelter) the patio at Tiny Diner (1024 E. 38th St., Mpls., 612-767-3322, tinydiner.com) are definite conversation-starters. Ditto the well-tended working garden that surrounds the place.

Follow Alice down the rabbit hole on a whimsical and delightful culinary journey at The Mad Hatter Restaurant & Tea House! Located…