Fortunately for us, someone took that question as other than rhetorical and pointed us towards even more places to try.

One of the places recommended was Crazy Cajun. This restaurant, which just celebrated its 3rd anniversary the first weekend in May, is helmed by owner John Nguyen, who hails from Texas. He grew up with Louisiana-style food and in a family with restaurant experience, but ended up here in the north, missing his favorites.

The menu has a variety of seafood iterations, from straight-up fried to fried and in a po-boy to boiled to raw oysters. There are also chicken wings, turkey necks, and gator, but seafood is the star here. 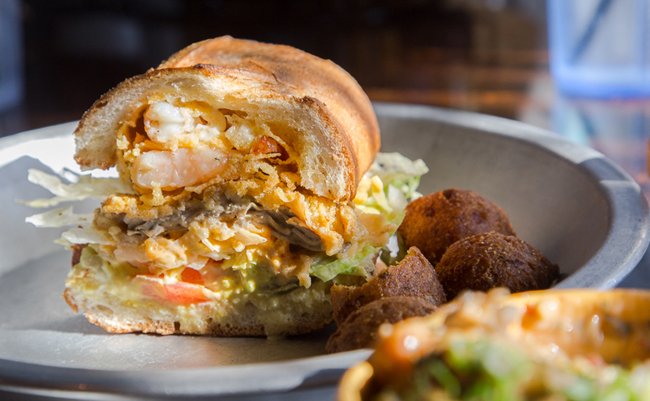 We tried the Dun’s Special Po-Boy ($13), which was fried catfish, shrimp, and oyster on a sizable portion of sturdy bread, with a zippy Cajun sauce, pickles, and lettuce and tomato. It’s the kind of sandwich you don’t want to eat on a first date, because you will make a mess of it. Go with someone you’re comfortable with and smash this beast into your face. It’s crunchy and tender and flavorful, with the fish mild and the Cajun sauce packing a little heat (but nothing overwhelming).

We also had that evening’s special (Wednesday nights only) of a fried seafood platter ($20 on Wednesdays). This is an enormous platter of fried oysters, shrimp, and catfish, served with hush puppies and three kinds of sauces, all made in-house: tartar, cocktail, and Cajun. The fried fish was flawless, crispy and hot, but not dripping with grease, and with the fish still juicy and not dried out. Like the fish, the hush puppies were beautifully fried and fresh, but still tender on the inside. 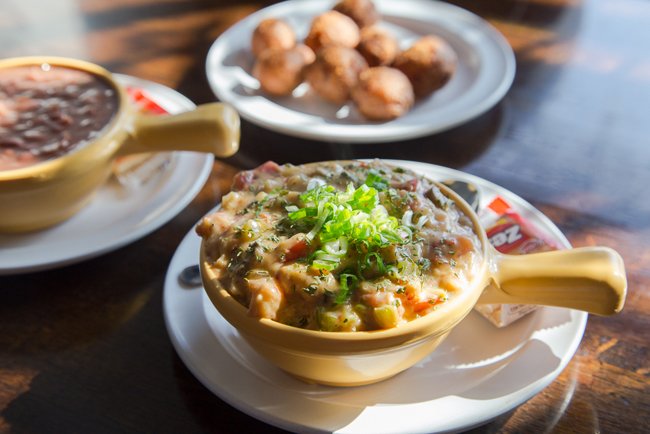 Perhaps most telling, the sides we tried were also excellent, rather than just things tossed on the menu to fill it out. The crawfish etouffee ($6 cup, $10 bowl) was wonderfully thick and stew-like with generous portions of tender crawfish and a little bit of heat. The red beans and rice ($5 cup, $8 bowl) was equally satisfying. Nguyen told us he simmers the beans for 5 1/2 hours, and uses a ratio of 1 1/2 pounds of bacon per 10 pounds of beans. There’s also pork sausage and ham hock, all of which leads to a smoky, salty (but not overly so) dish that stands well on its own.

Crazy Cajun also offers DIY seafood boils, with prices varying depending on ingredients chosen. Options include blue crab, snow crab or king crab; crawfish, jumbo shrimp, or mussels. Of course you can also add pork sausage or corn and potatoes, and there are varying levels of heat as well as two kinds of sauces to choose from. We suspect that this is an excellent option too.

Owner Nguyen hasn’t forgotten his Texas roots. He’s not only a chef, but a woodworker, and the restaurant has both a hightop table shaped like the state of Texas, and a long picnic table painted like the state flag, both of which he built. Crazy Cajun indeed. 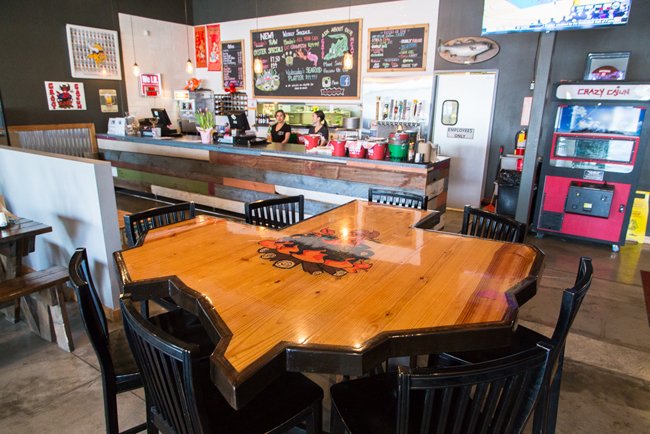 Check out the full article on Heavy Table, here.

Get Your Fix for Louisiana Fare in Minneapolis Northwest You must check out Crazy Cajun in Brooklyn Park. Nestled in an…